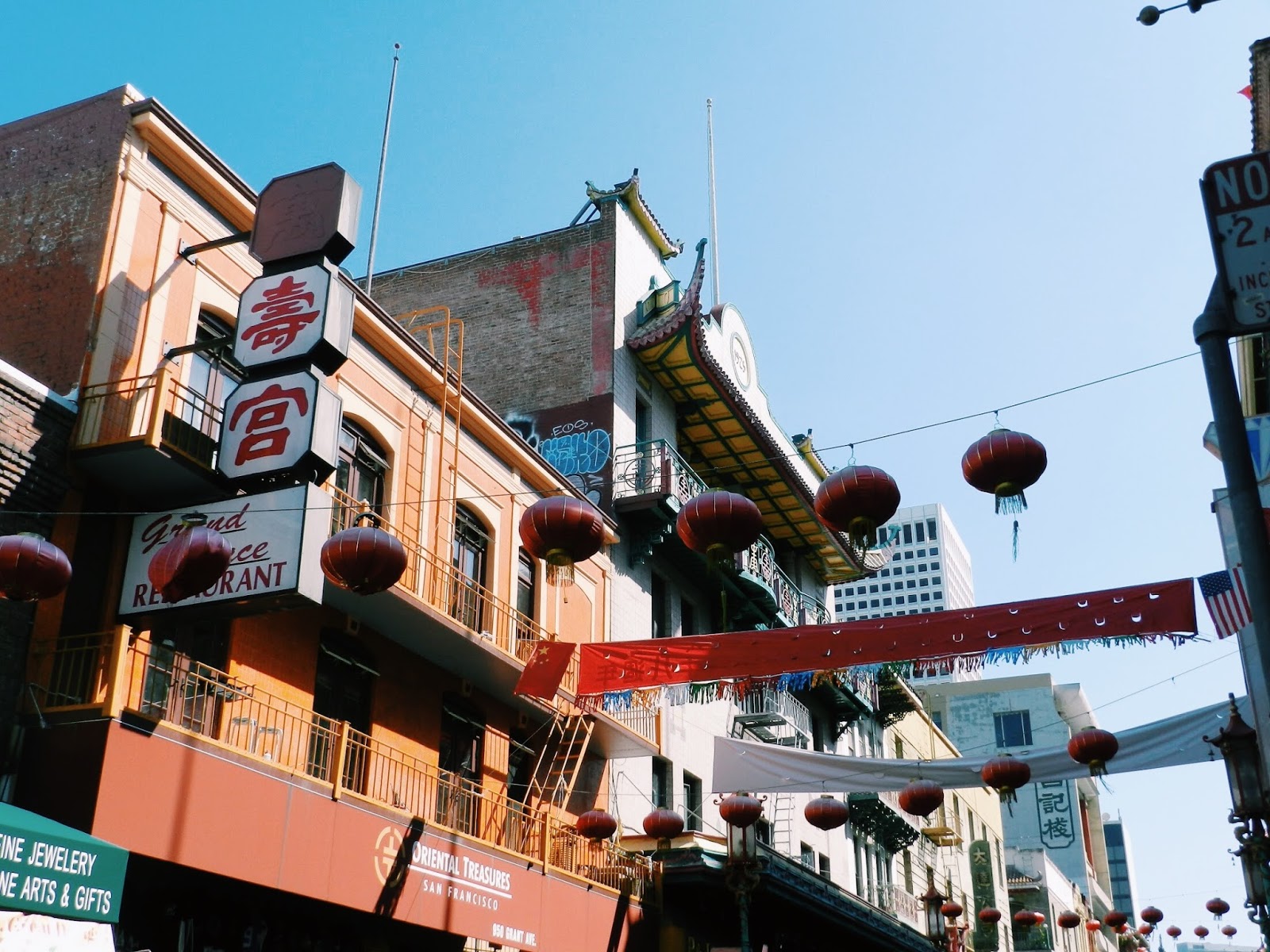 If you’re goinggggg to San Franciscooooo, be sure to get excited because this was one of my favorite trips ever. I know Californians have this NorCal vs SoCal thing going on, but how can you when both cities are each their own paradise?! If you’re living in Southern California and haven’t had a chance to make it up the coast, you’re missing out. Every street you turn is filled with so much life, culture, food, and style that it’s hard for most places to compete with the City by the Bay. There is a lot to do and we didn’t have much time, but we weren’t going to leave without checking off just about every item on our itinerary damn it! We had a jam packed schedule and made it work without feeling totally exhausted. Here’s what our weekend looked like:

That being said, we decided to rent a car for the weekend and we were off!

Lunch: anywhere inside the Ferry Building Marketplace! With so many incredible vendors you can’t go wrong!
Dinner: Flour & Water, Central Kitchen (make reservations!), or Blowfish Sushi
Drinks: Trick Dog and/or The Hideout
Do:
The Painted Ladies 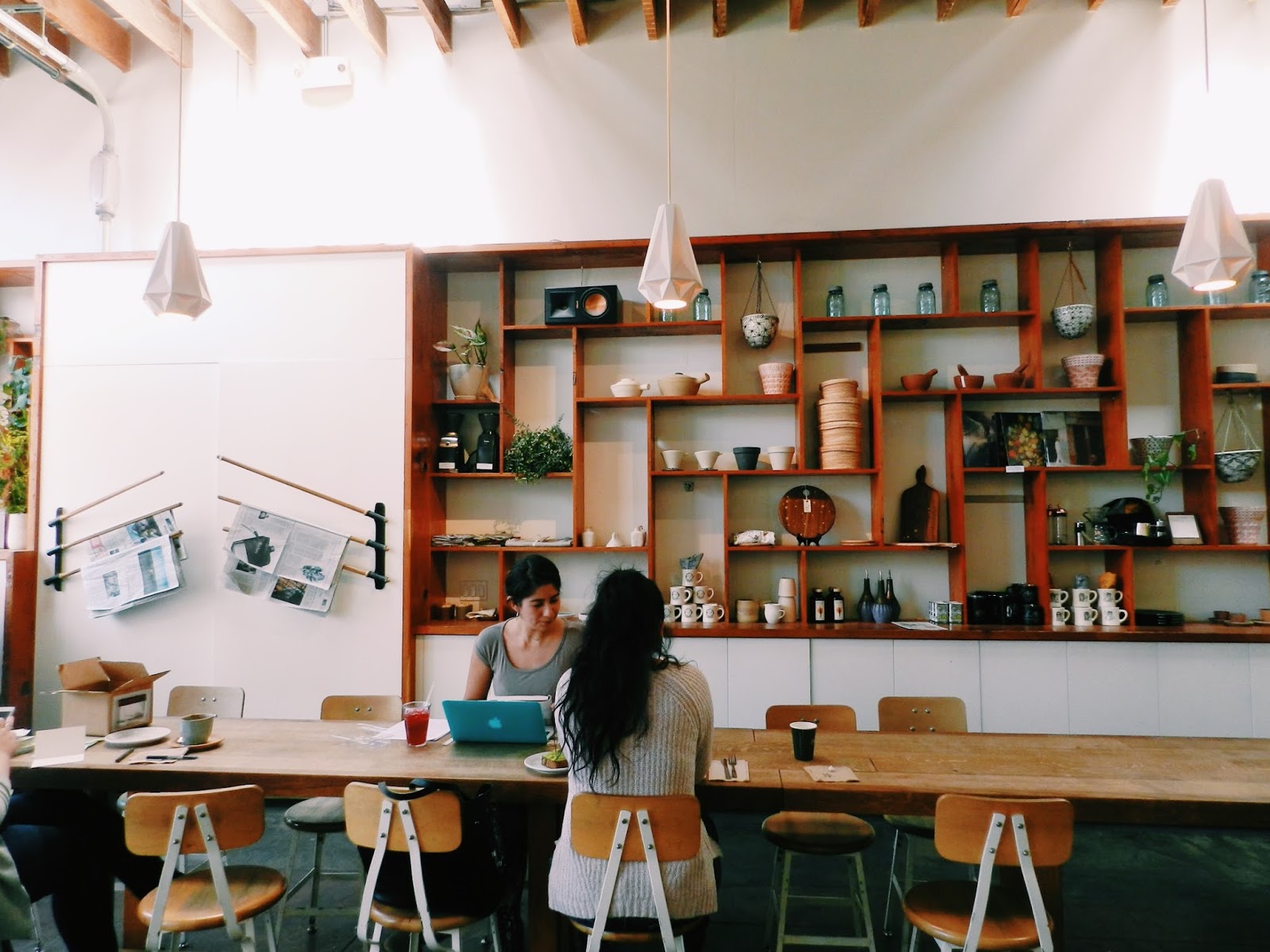 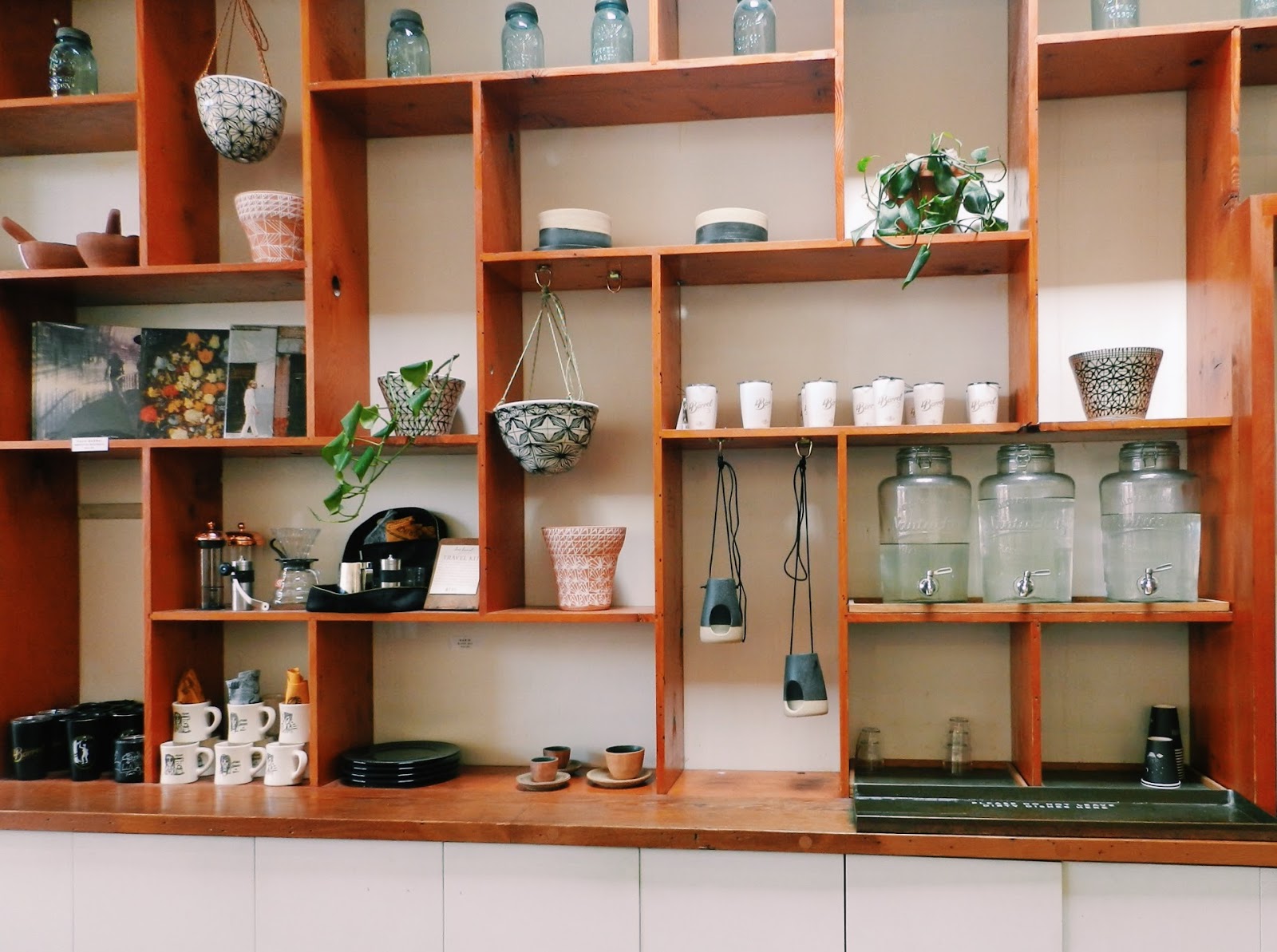 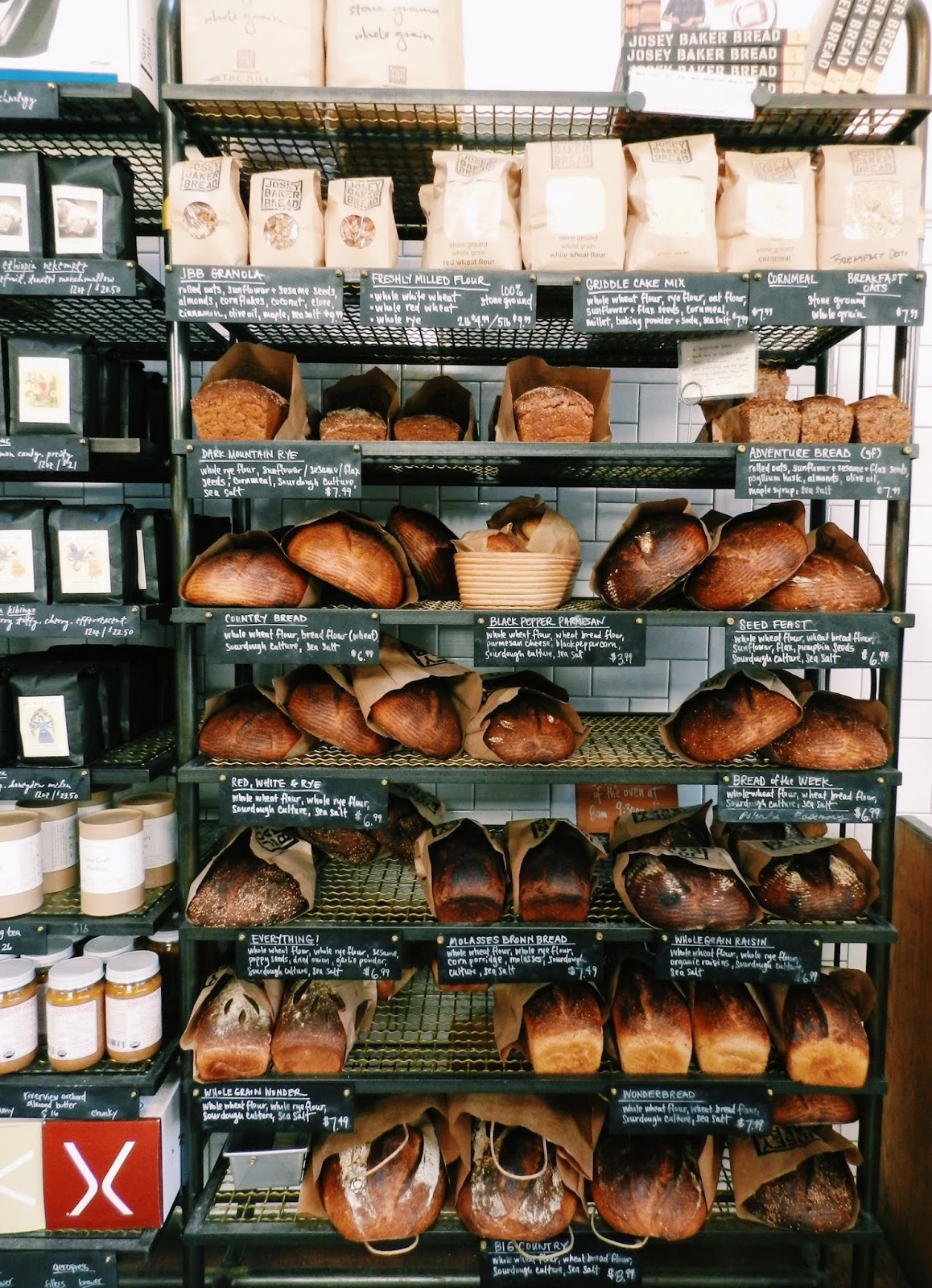 We landed in San Francisco at 11 a.m. and headed straight into town to grab a coffe and a quick bite to eat. There are some people who would never pay $5-$8 for toast and then there are others who have been to The Mill.  This spot was recommended to us by a few friends and had a great menu of artisinal toasts and good coffee. The space had a great vibe and the toast was unbelieveable. I know it’s just “toast,” but I have never had bread that fluffy and delicious IN MY LIFE. We ordered the Avocado Mash with black pepper and sea salt on everything bread, Almond Butter with butter and sea salt on whole wheat raisin bread, and two lattes. It was the perfect fuel to start the day. 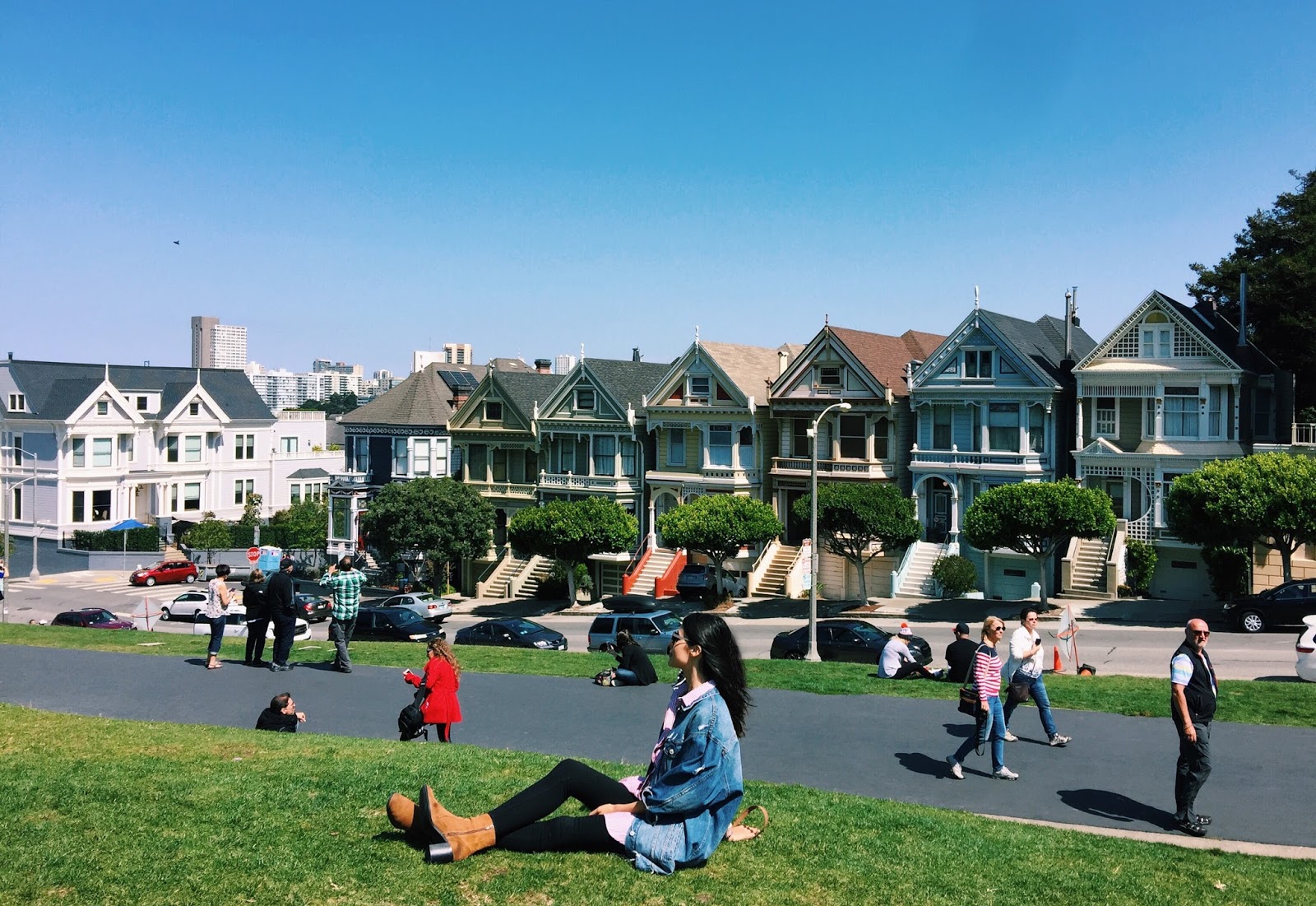 The Painted Ladies
For the best views of these iconic beauties, head to Alamo Square Park and have yourself a Full House moment. Bonus that it’s within walking distance of The Mill! 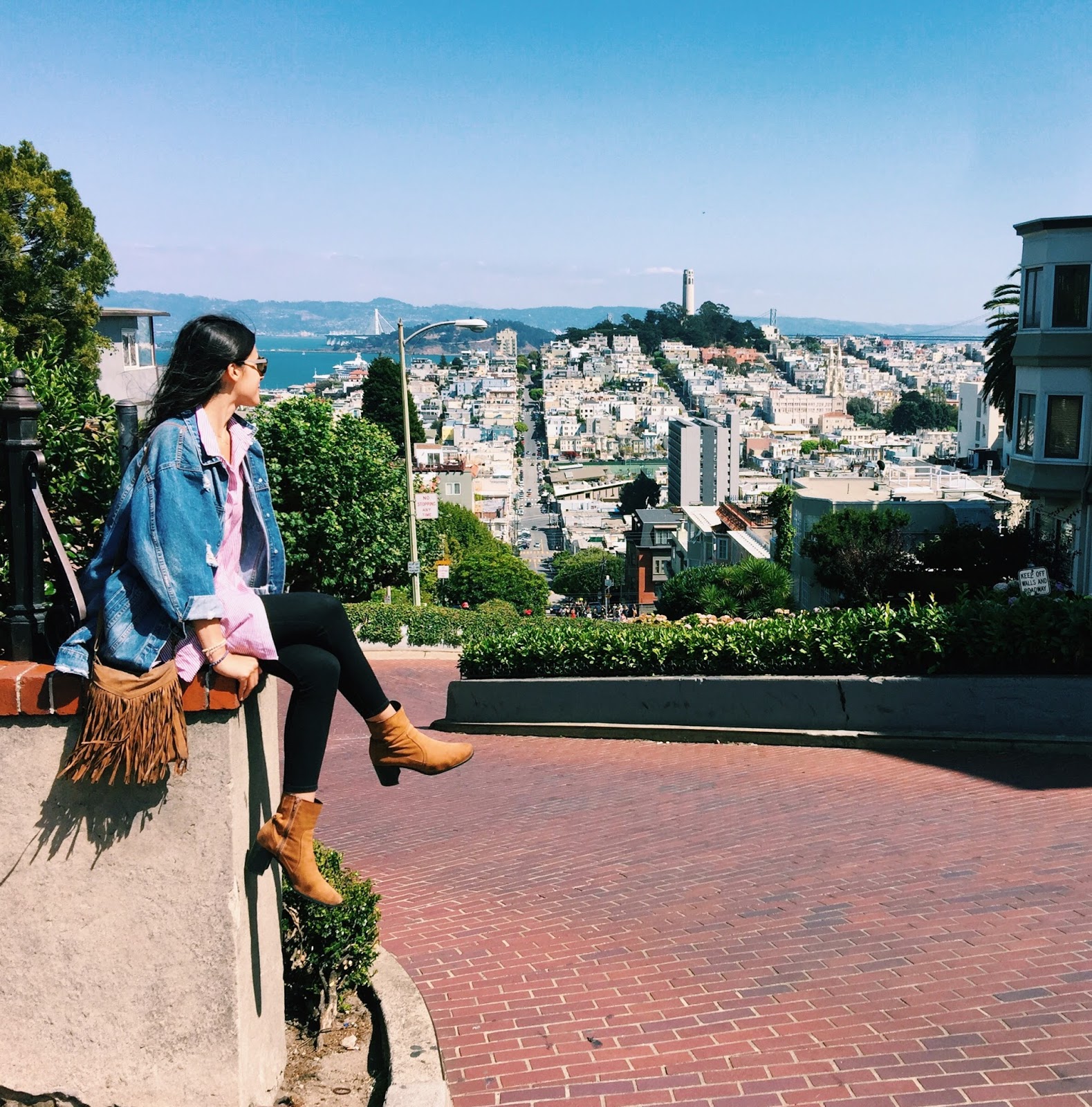 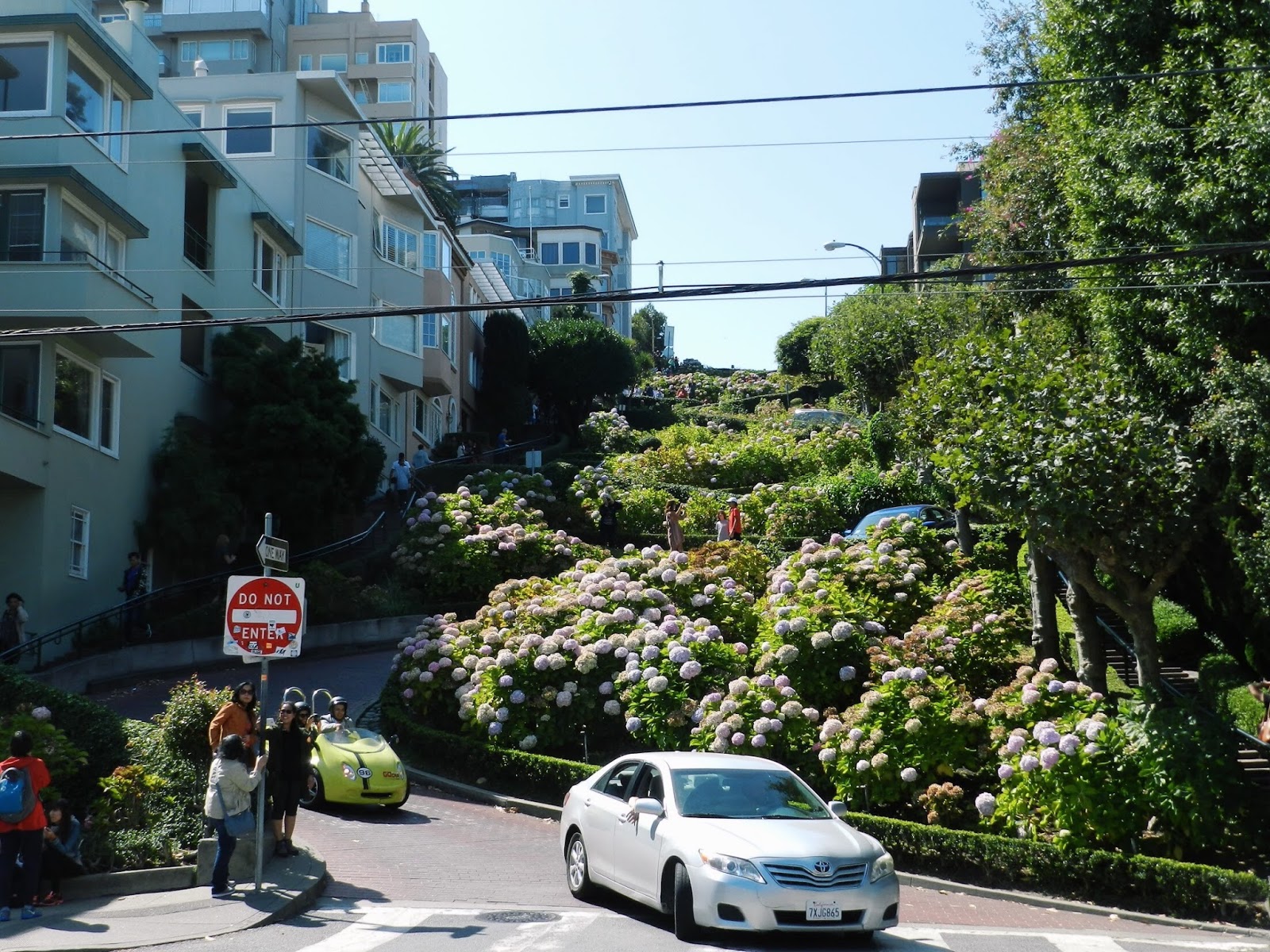 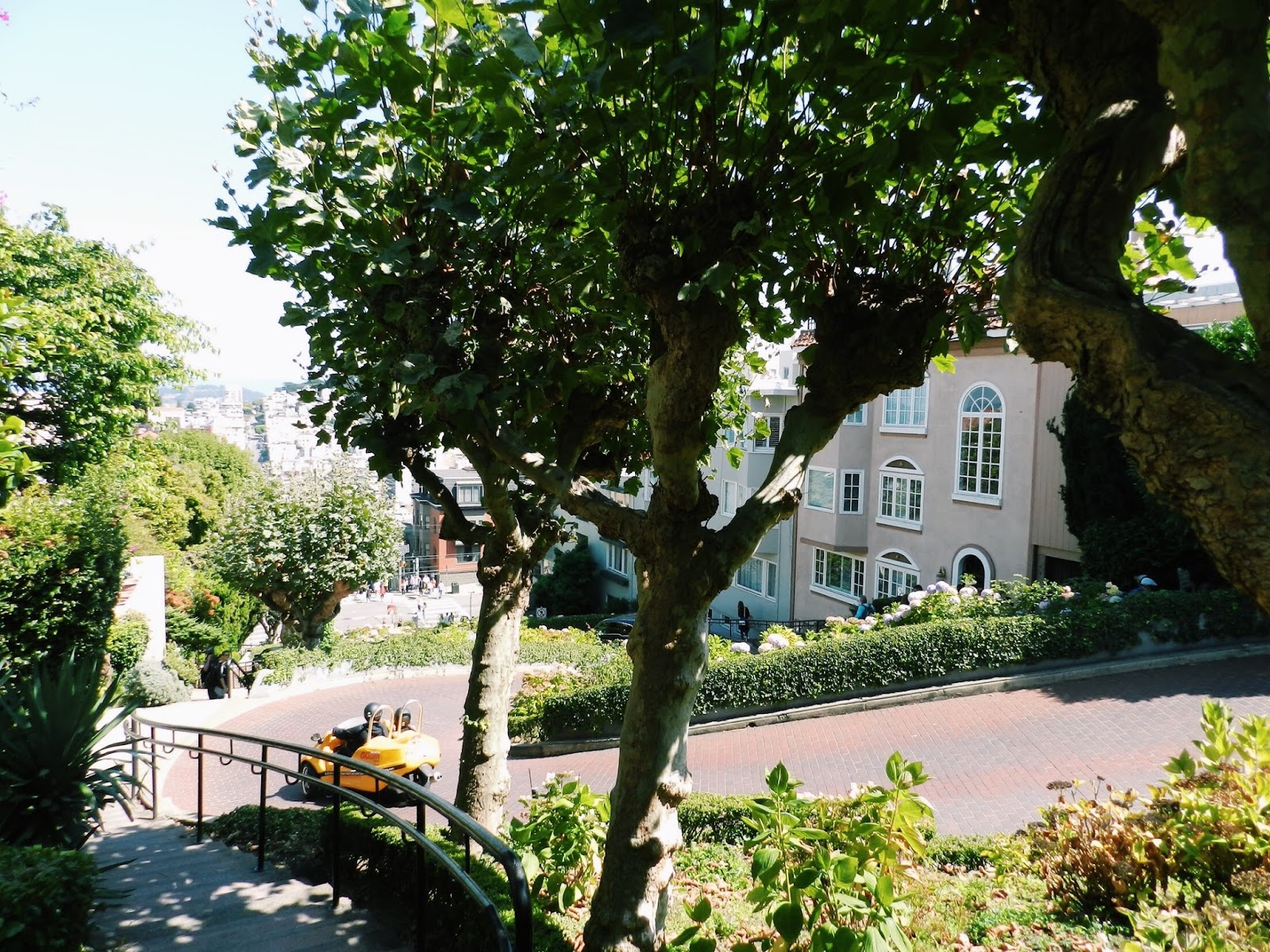 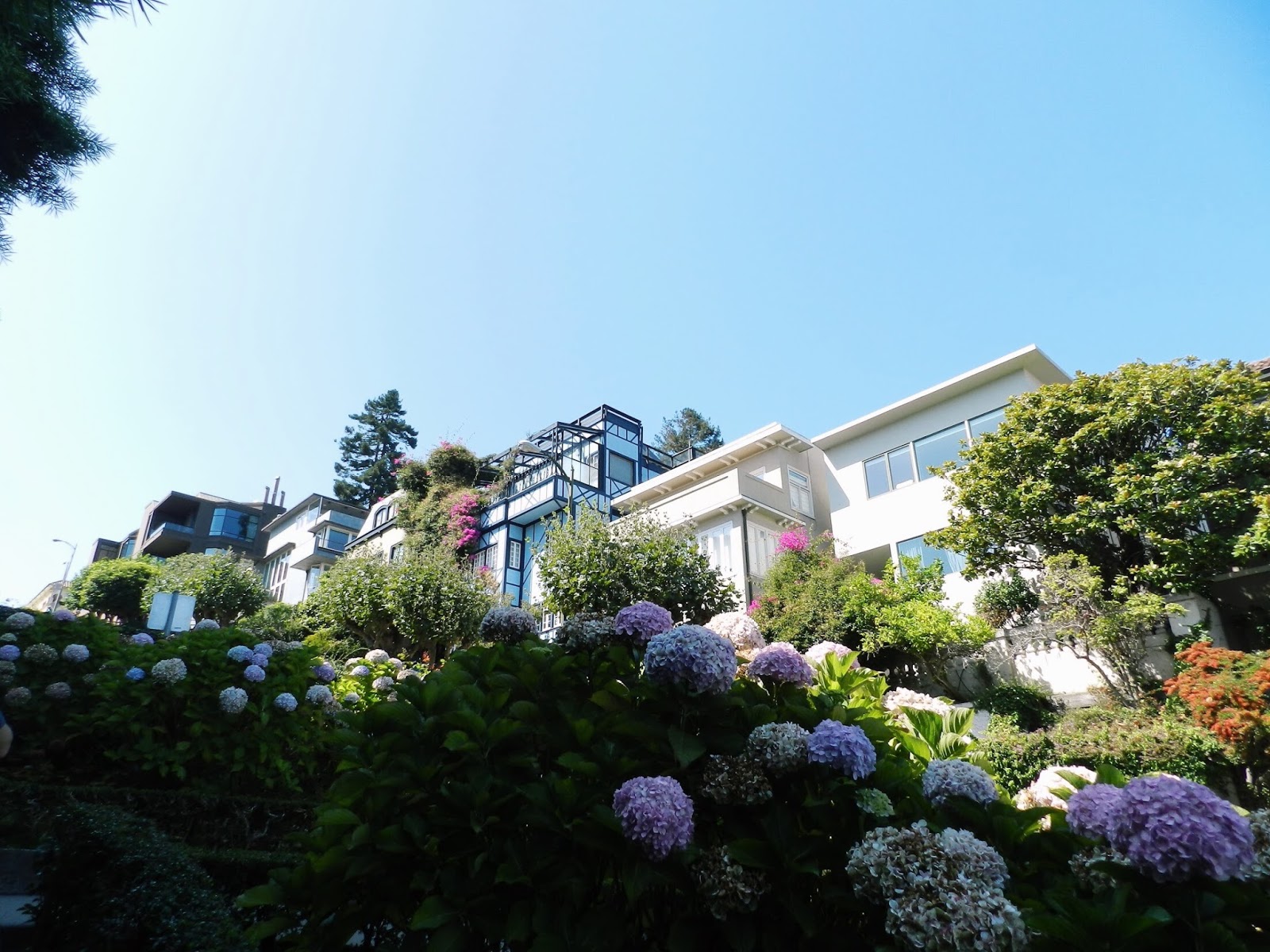 Lombard Street
“The Crookedest Street in the World” had spectacular views from both the top and bottom. This scenic street is nestled in between manicured mansions and the most beautiful flowers! It’s totally worth the visit, the walk, and the drive down. If you get easily car sick, I would probably recommend just walking up and down this one… 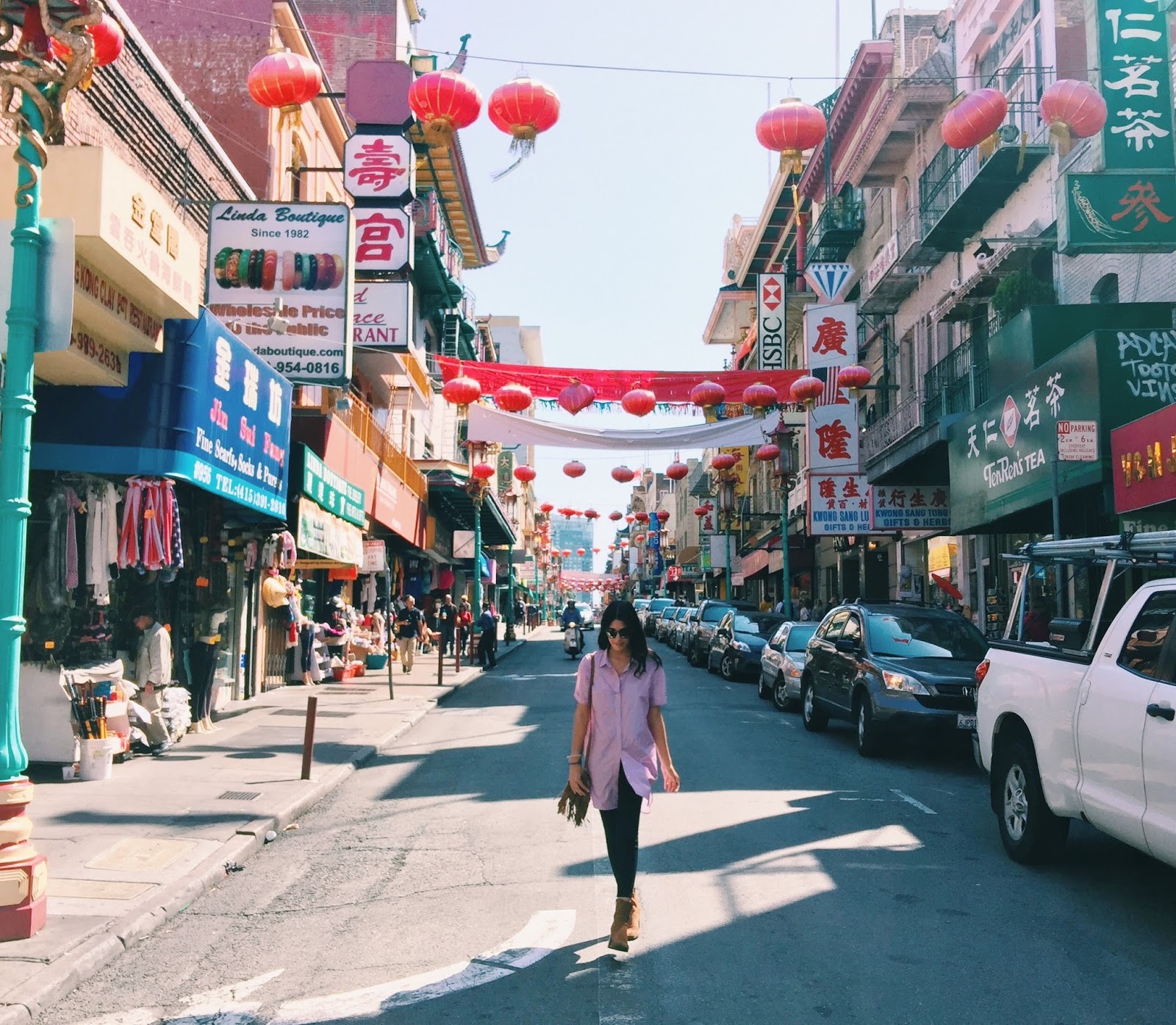 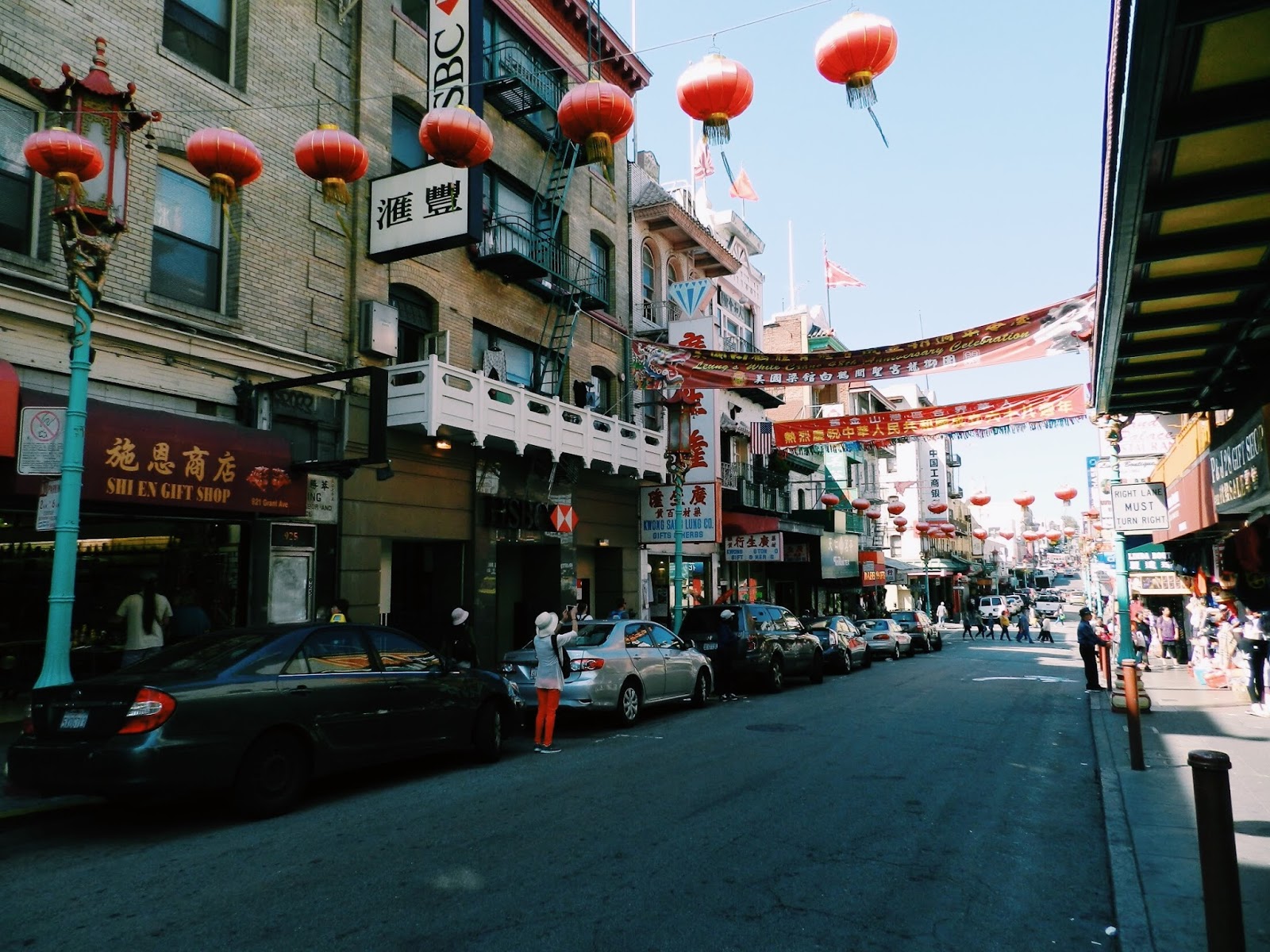 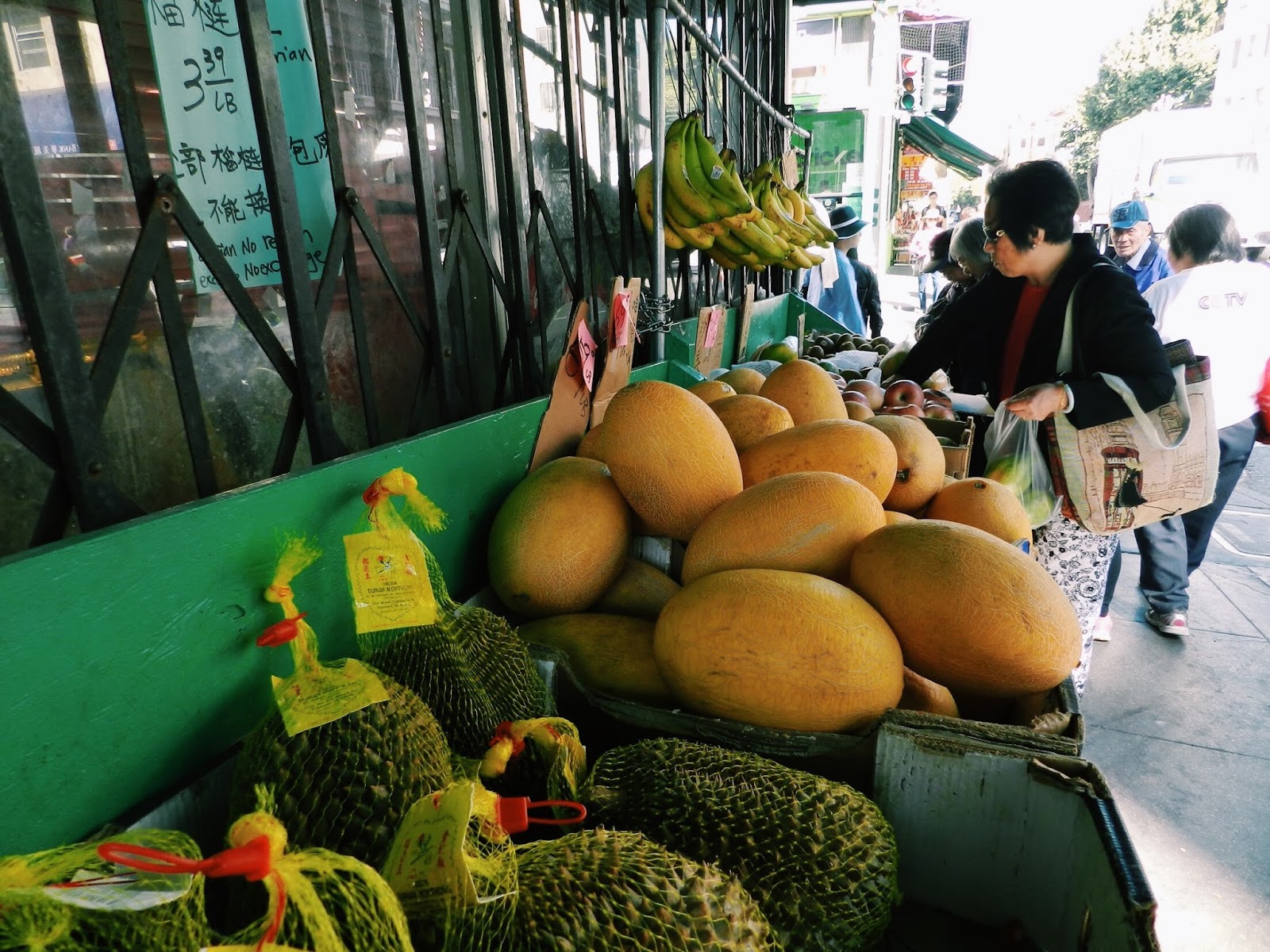 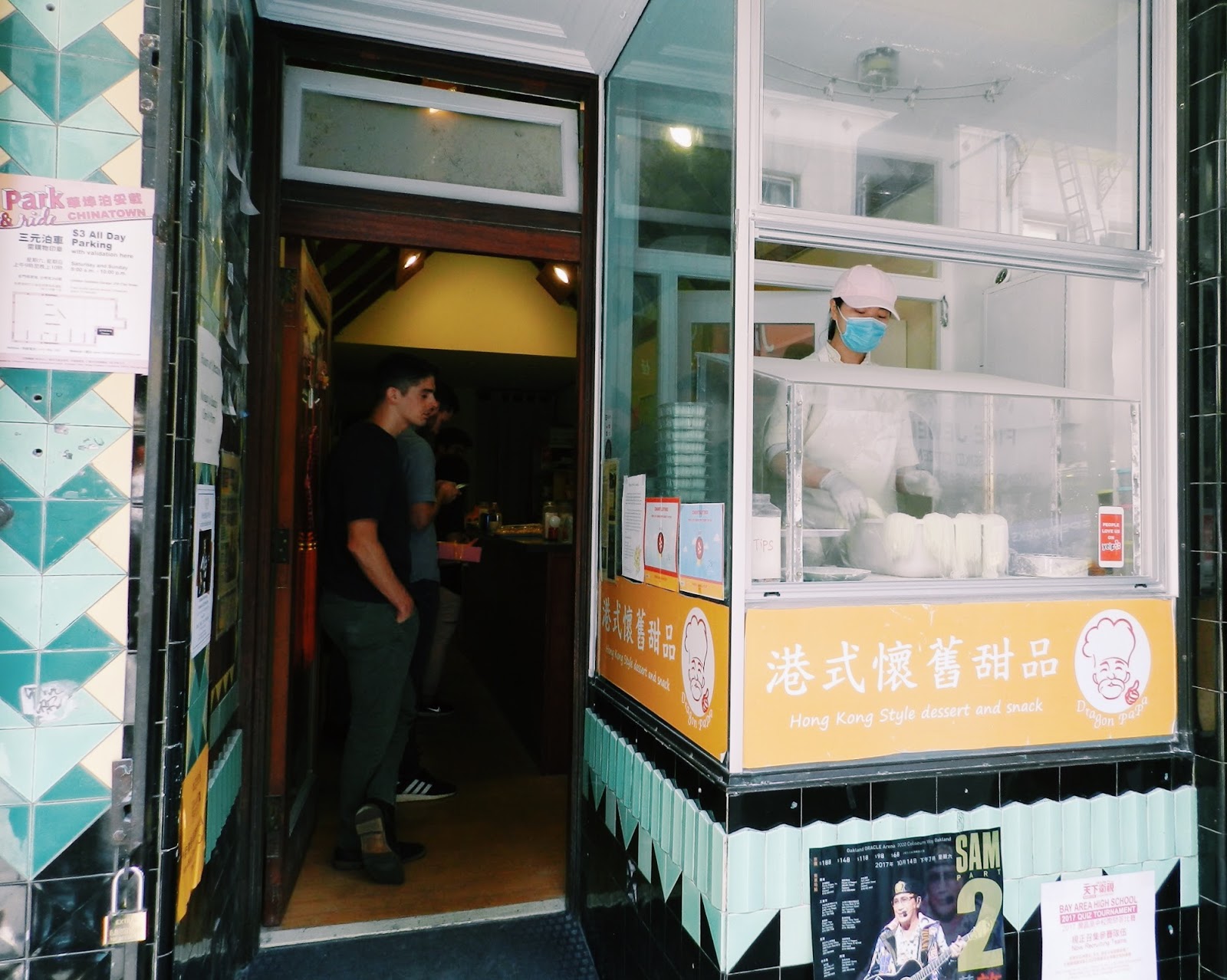 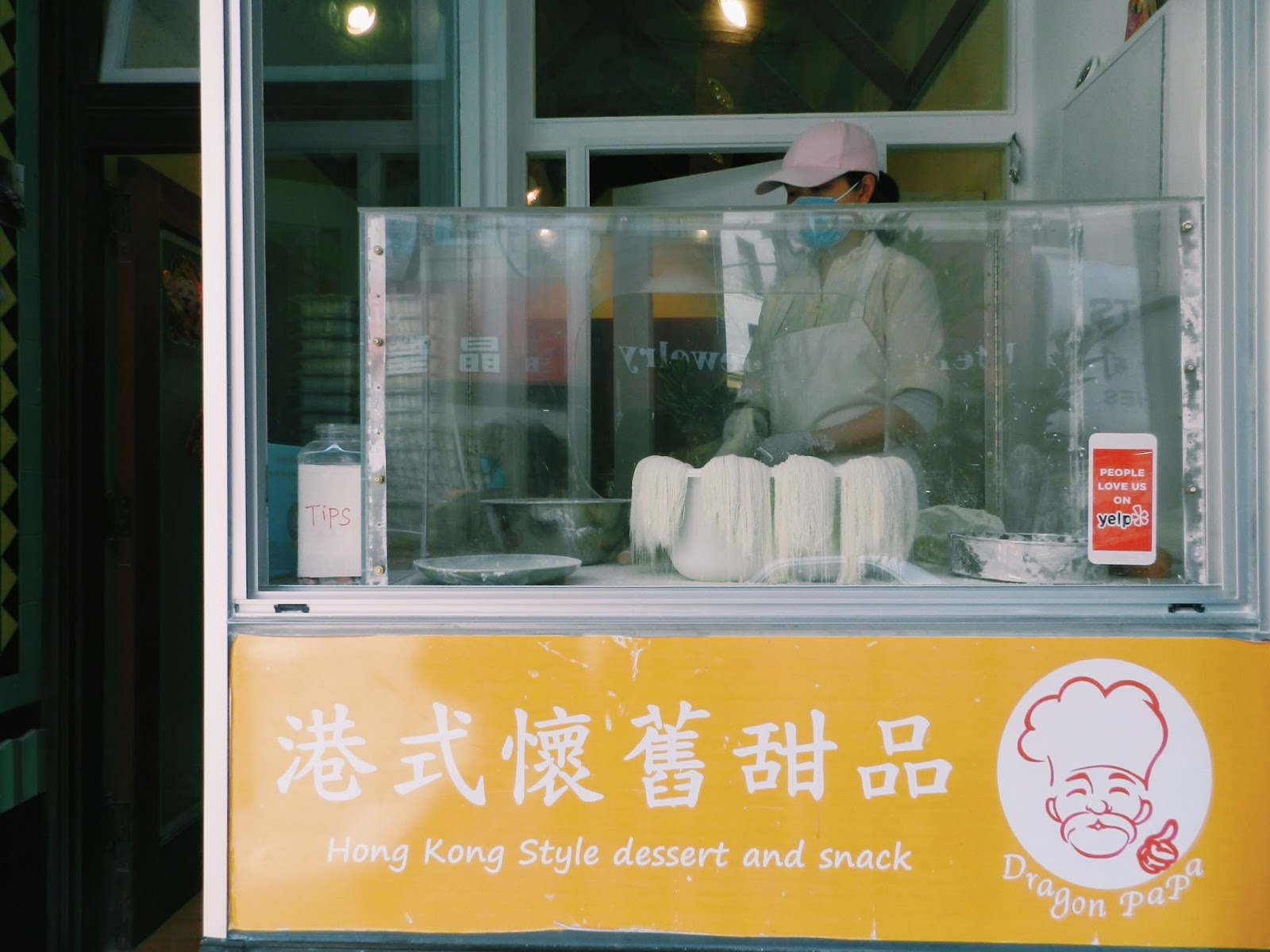 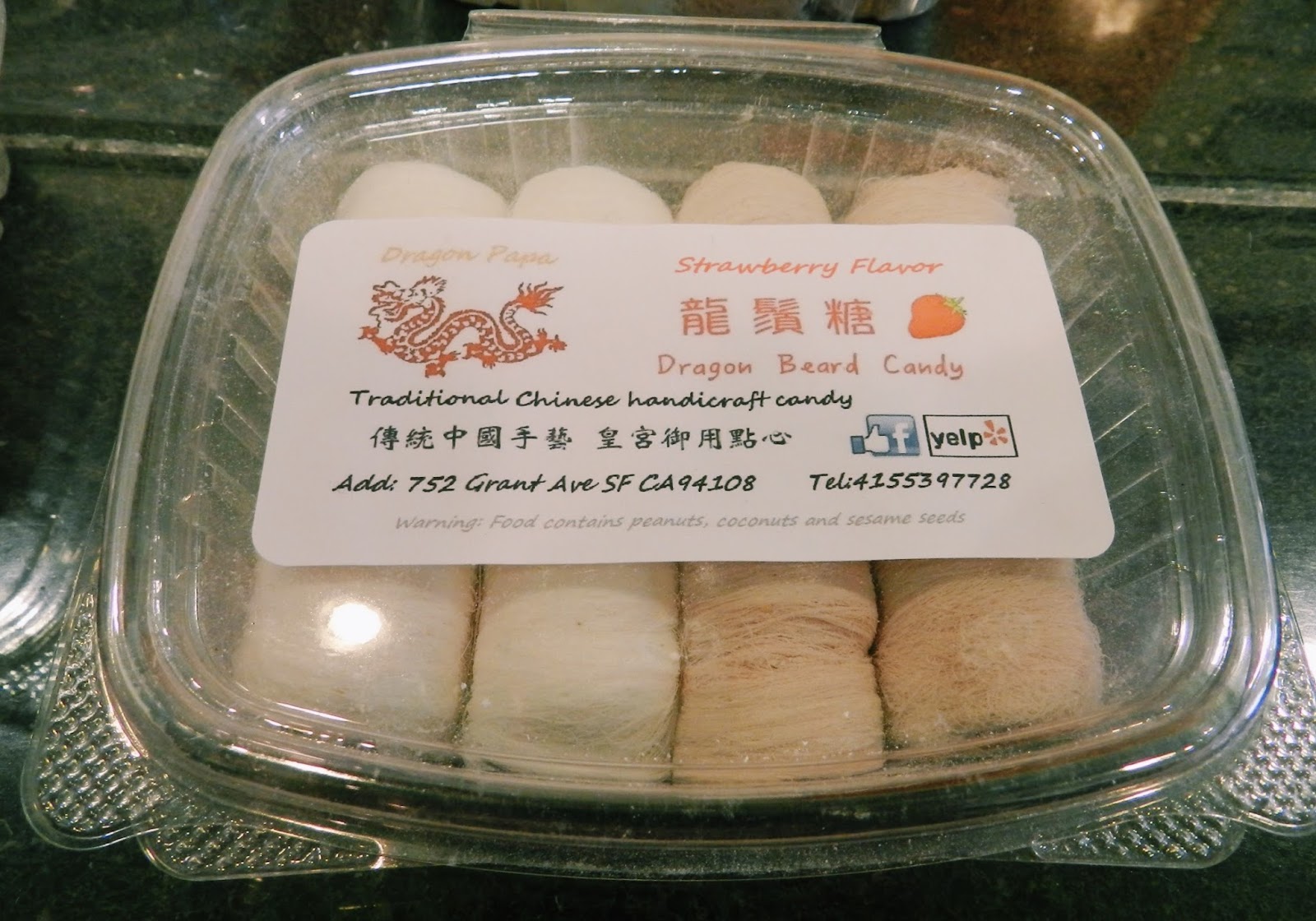 ChinaTown
Walking the streets of ChinaTown felt like we were momentarily transported into the Far East. It is the largest ChinaTown outside of Asia and the oldest ChinaTown in North America. The streets are filled with colorful red lanterns, shops, restaurants, and small markets.
We wanted a small, sweet snack before dinner and the window of Dragon Papa caught our eye as a shop worker pulled dragon beard candy with her hands. We both had never had the candy and thought, “when in Rome!” It’s a little hole in the wall shop run by a father and son duo who were giving everyone a lesson in the history of dragon beard candy while we were waiting. The story goes that it was first made for the emperor of China many centuries ago and was first only available to China’s upper class since the process is so delicate it requires human touch to make. The white stuff is finely pulled malt syrup that looks like a dragon’s beard. Once pulled the white stands are then wrapped around a combo of toasted peanuts, sesame seeds, and coconut. They also have a few other flavors like mango, strawberry, coffee, and green tea. It was so good and so interesting to eat! 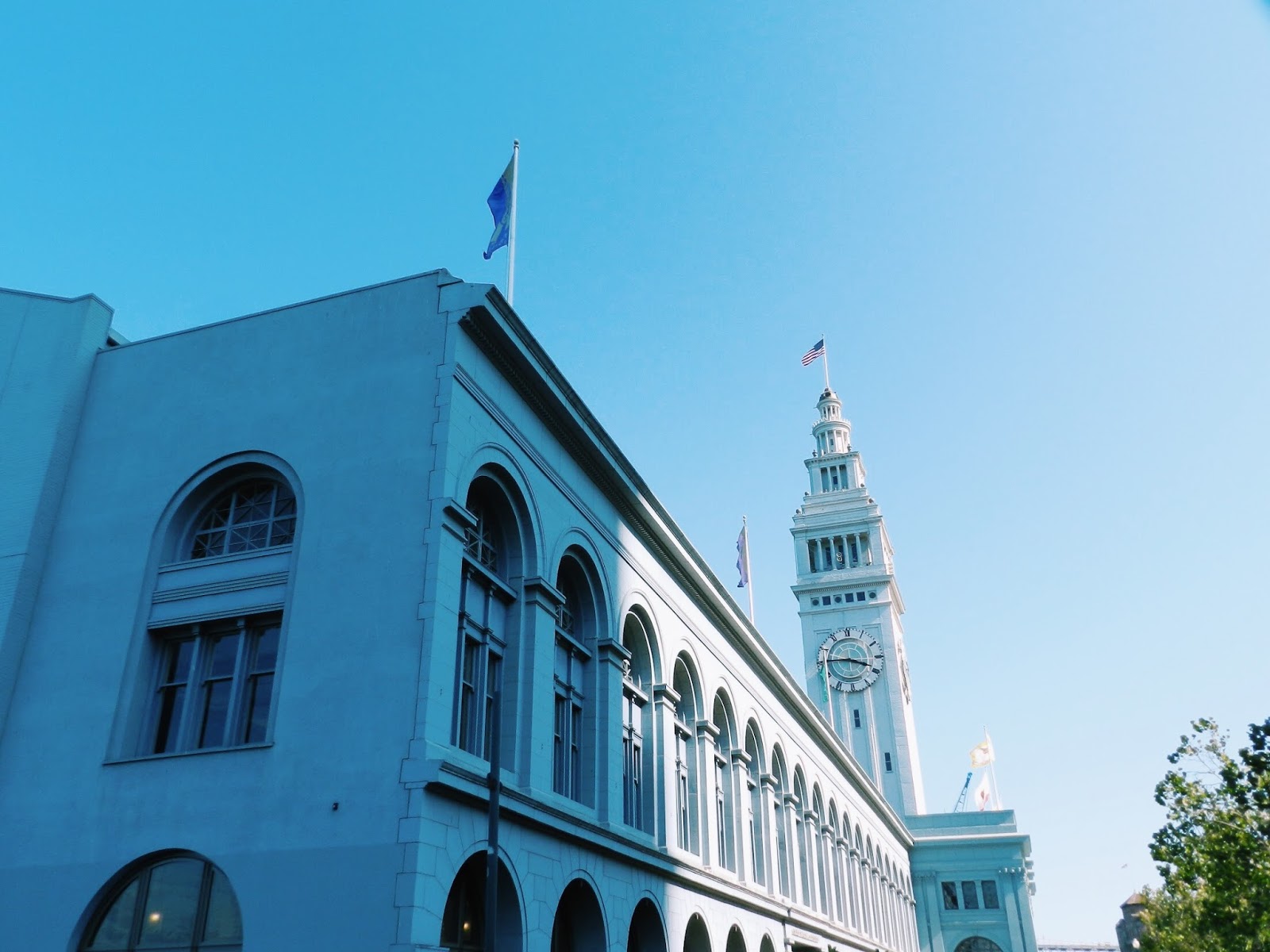 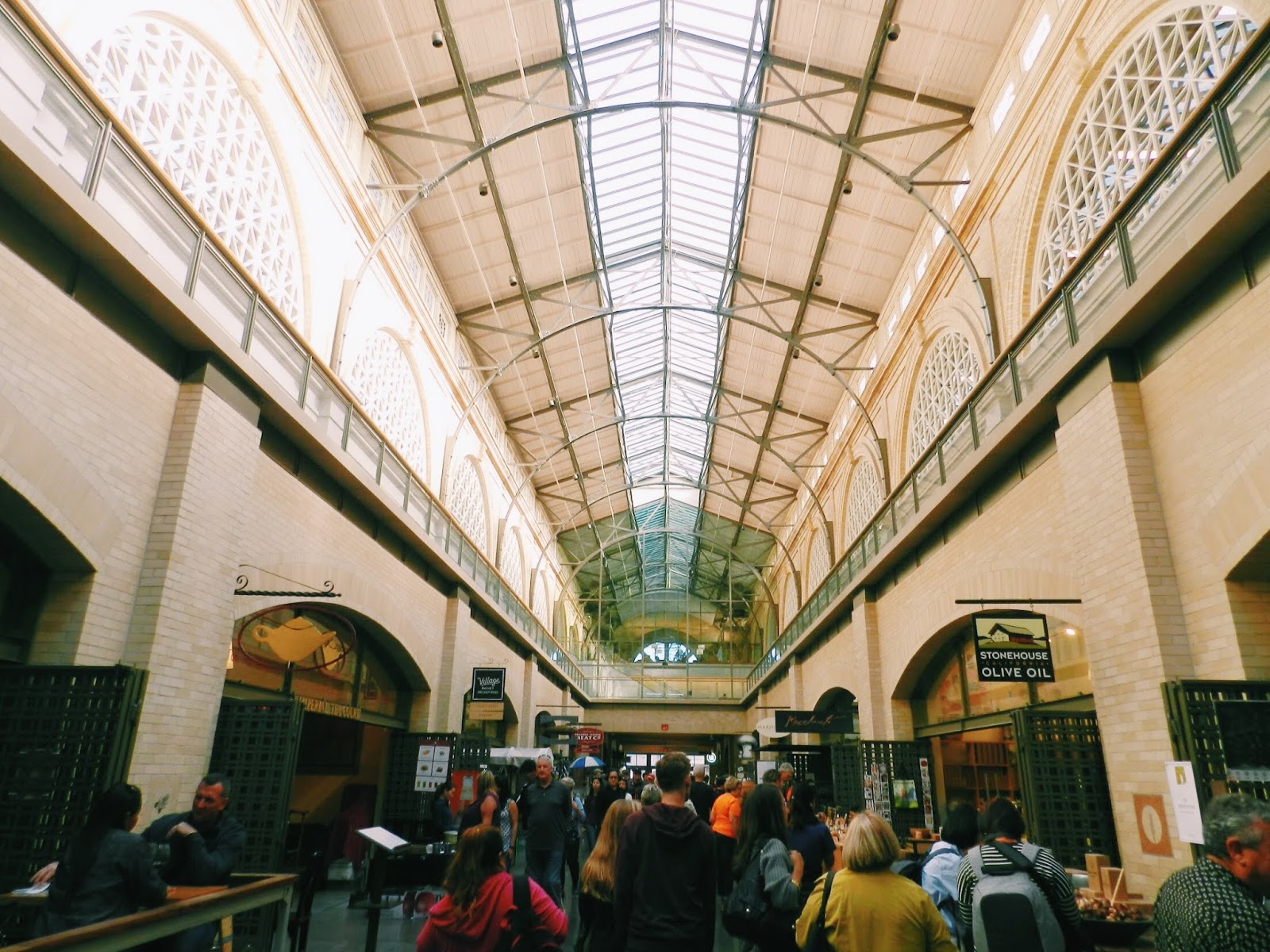 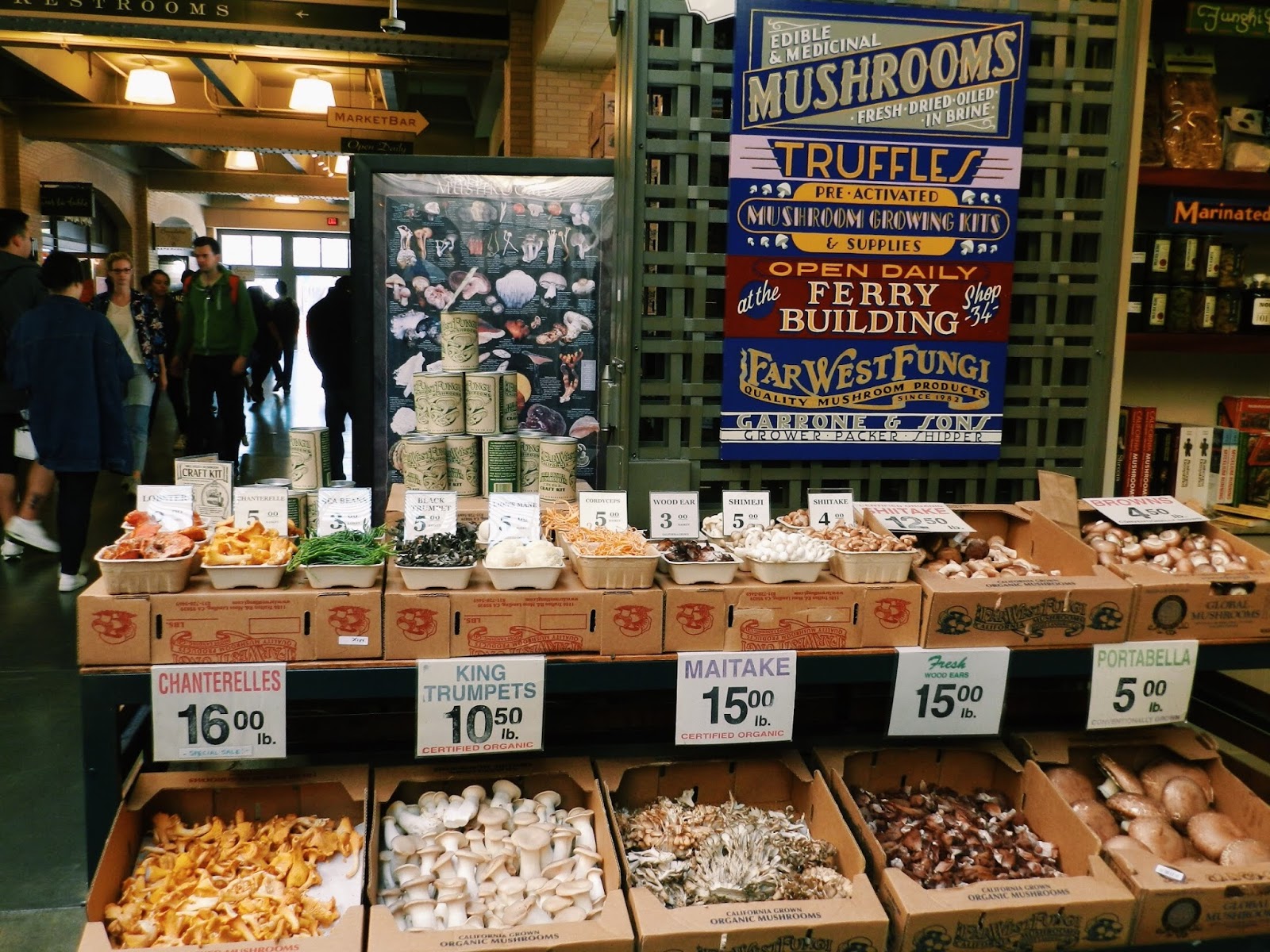 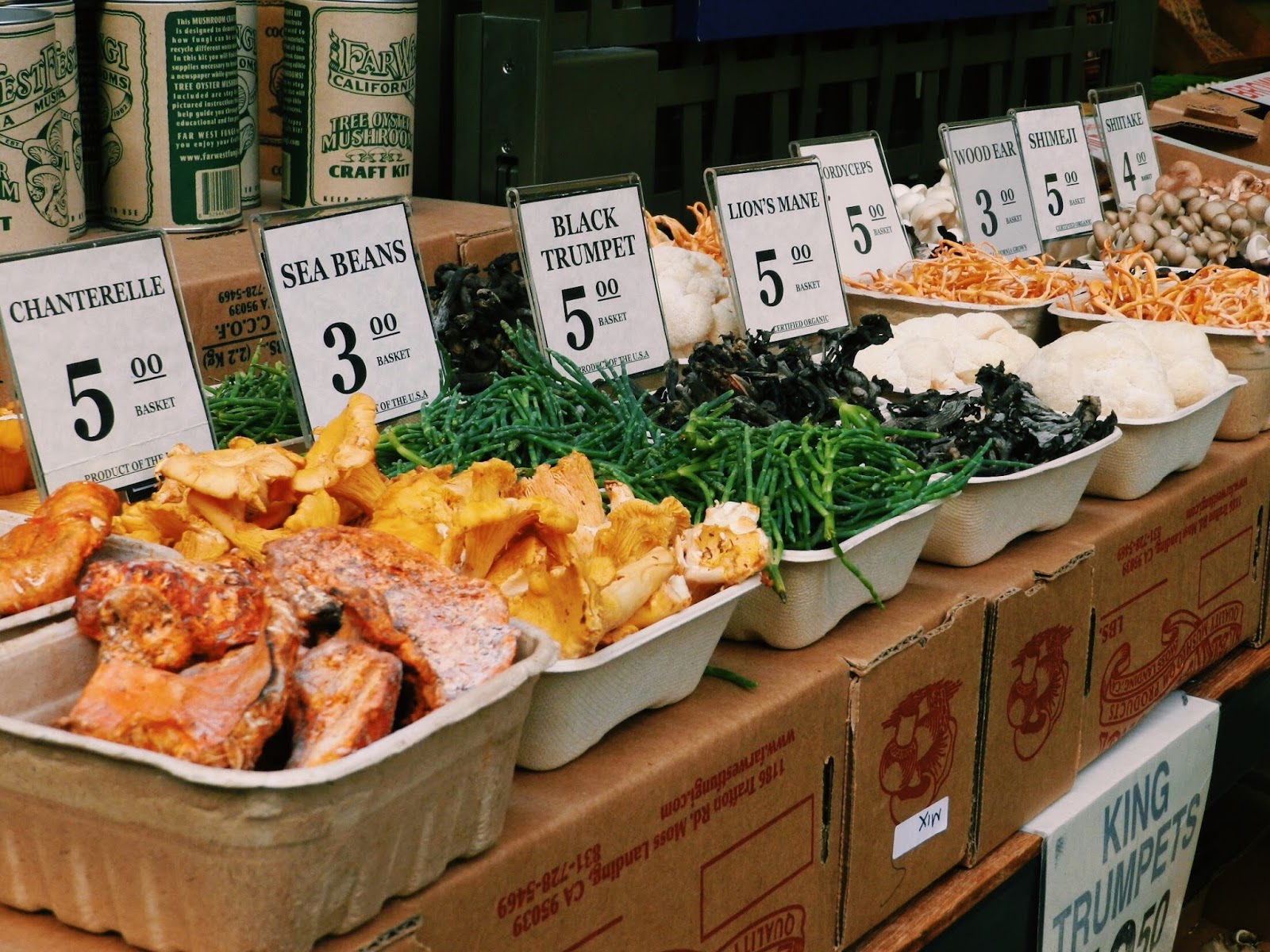 Ferry Building Marketplace
This place was our artisan foodie dreams come true. The historic building is filled with local produce and independently owned restaurants. Most vendors give out free samples of their products which we indulged in, but I would definitely recommend stopping by here for lunch. Anywhere you choose is sure to be a great choice. I would love to come back and do a food tour/vendor hop because each shop and restaurant looked incredible. We only stopped here quickly before heading back to our Airbnb to get ready for dinner, but picked up some wine at the Ferry Plaza Wine Merchant which had a great selection! 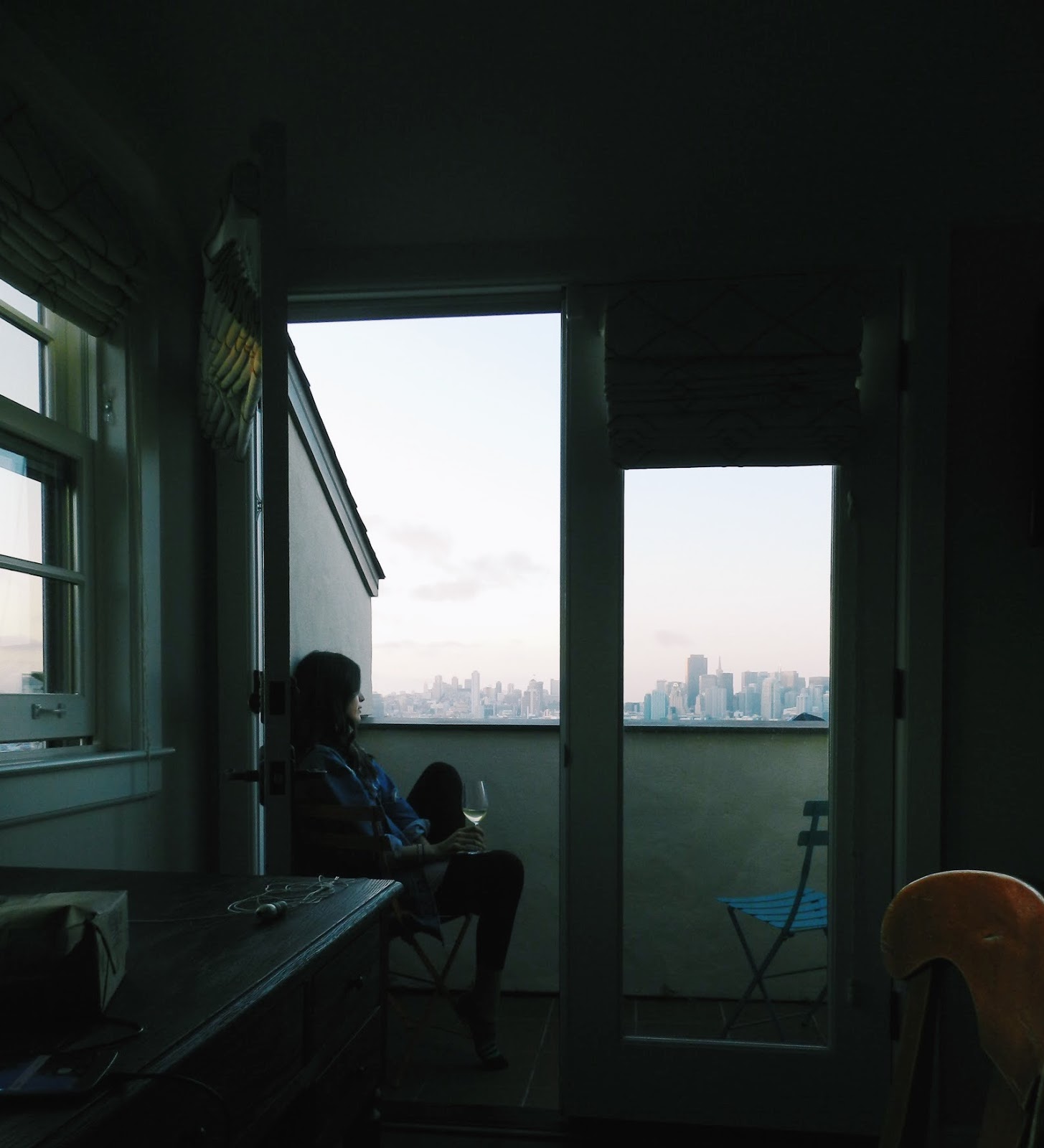 After a long day exploring, it was nice to come back to our Airbnb in Portero Hill for some R & R before dinner (thanks so much for having us Fran!) Our room had AMAZING views of the skyline and the cutest little balcony to enjoy them on. We didn’t make reservations at either of the restaurants we really wanted to go to (Flour & Water and Central Kitchen), but we ended up finding Blowfish Sushi around the corner. They offered a late night happy hour and we lucked out with some free sake and a moderate bill. Although it wasn’t totally where we wanted to eat, we had a great meal!
After dinner we wanted to have drinks at Trick Dog next door, but we should’ve gotten there a little earlier because it was pretty slammed. We ended up finding The Hideout in the back of Dalva’s bar after grabbing a drink at Dalva’s first. It’s a small room with a 70’s vibe and incredible cocktails. We were lucky to find seats at the bar and stayed for a cocktail (or two) before calling it a night because it was Napa in the AM!
(Visited 189 times, 3 visits today)

It’s time to be proactive with your health instead of reactive. With Full...

Knightwood Male Enhancement are essentially proteins that are separated into...

common hand wart. So the what reasons wart? As you could see the principle...

Amazin Brain bodies are not intended to manage the degree of worry in this...